Halston and I procrastinated in booking our road trip accommodations. When we finally sat down to book our Airbnb’s, I fell asleep on the dining room table and offered little to no help past the third booking.

Which brings us to the Mod Lodge in Flagstaff, Arizona. The retro-styled, two-story home is actually the oldest running recording studio in Flagstaff, still in action since the 1970’s. It sits at the base of the San Francisco Peaks and is located near numerous trails.

When we booked the home, we thought we had the entire place to ourselves, unaware that we actually only booked a room and would be sharing the house with the owners, their two children, a dog, college students in long-term room rentals and other Airbnb guests. Lesson learned: Always read thoroughly and don’t book things when sleep deprived!

Fortunately, everyone at the house was extremely nice and I don’t think anyone went through our luggage while we were out.

The first night we stopped by Beaver Street Brewery, a microbrewery offering wood-fired pizza in Historic Downtown Flagstaff. The temperature dropped down to a delightful 55 degrees that night so we went ahead and sat outside. I tried a pint of the Red Rock Raspberry Ale, a fruit ale with soft raspberry notes, and gobbled down some pizza.

The Oak Creek Canyon scenic drive called our names early in the morning. Oak Creek Canyon is a river gorge located between Flagstaff and Sedona, located in the Coconino National Forest. The views from Oak Creek Canyon Vista were breathtaking and we stopped the car a few times just to walk around and explore the area. 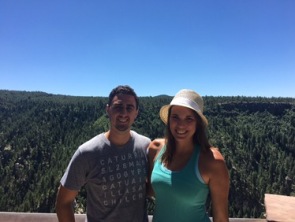 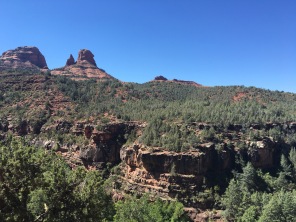 The night before, we noticed the bright night sky and the thousands of stars dotting it. In 2001, Flagstaff actually became the “World’s First International Dark Sky” city, the designation awarded by the International Dark Sky Association. It is given to towns and cities “with exceptional commitment to and success in implementing the ideals of dark sky preservation and/or restoration, and their promotion through quality outdoor lighting.” Simply put: there isn’t a lot of light pollution coming from Flagstaff.

We visited the Lowell Observatory that night in order to better enjoy the sky. We didn’t expect to see so many people but it seems to be a popular hangout for locals as well as visitors.

The biggest telescope there, the $53 million Discovery Channel Telescope, has been used to study life on Mars and Pluto and it was the telescope that in the 1920s determined that the universe was bigger than the Milky Way.

I had never touched a telescope before. When I was younger, I asked for one for Christmas and instead I got a microscope. Thanks, Santa.

That night I saw the moon through their fancy telescope. I saw the dark stretches of the moon, clear as day. It felt so near, it was unreal! We spent the rest of the night looking at different stars through smaller telescopes, popping in and out from different lectures and bumping into other stargazers (it was pretty dark at the observatory!).

Another site we stopped by in Flagstaff was the Wupatki National Monument where ancient pueblos and artifacts dot the landscape, remnants of the people who used to live there. 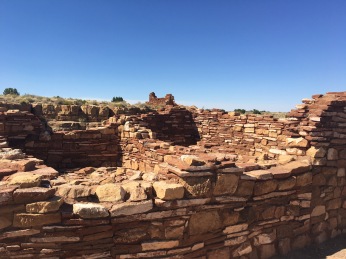 Not far from there, the extinct Sunset Crater Volcano awaited us. It’s 900-year-old eruption reshaped the surrounding landscape in the area and affected the people and wildlife living there.

Walking around Flagstaff bundled up in a sweater was a highlight for me. Honestly, I could’ve just sat outside for two days and done nothing but look at the stars, sip wine and watch out for elk, all while snuggled up enjoying the weather and it would’ve been fine. Flagstaff’s weather is every basic girl’s dream.

Flagstaff is a huge ski destination, with the Arizona Snowbowl located about 7 miles north of Flagstaff so I feel the need to return in the future, mostly to sit by a fire and ride a chairlift since I have no desire to break all the bones in my body by attempting to ski.

Have you visited Flagstaff before? How about that sweater weather?!

One thought on “Road Trippin’: Flagstaff”