Good morning and happiest day of the week to everyone and their mother!

Last night I dreamed of milkshakes as I am still recovering from my visit to Toothsome Chocolate Emporium. The 19th century Steampunk-inspired restaurant is officially open, so make sure you stop by this weekend!

But that’s not why you’re here so without further ado, the things I’m loving this week!

Mimo: If you’ve ever had the inkling to learn the basics of programming languages such as CSS, HTML, Java, SQL, C# and even hacking (!) but haven’t had the time to sign up for a course or aren’t even sure if that is something you’re passionate about, make sure to download Mimo. It’s simple design and the straightforward language used make it easy for users to learn on-the-go. The introductory lessons are free or you can subscribe for $6 a month for advanced lessons.

because I said I would: One of the speakers at the Florida Governor’s Conference on Tourism (no, thankfully Rick Scott wasn’t in attendance) was Alex Sheen, the founder of the social movement because I said I would. The movement “encourages and supports making and keeping promises (big or small) to end suffering, establish peace and build happiness” through the use of promise cards to keep people accountable.

He shared countless stories, from his own father’s passing to the story of a father who used to leave notes on his daughter’s lunch, was diagnosed with cancer and promised to write a note for every school day until her high school graduation because he didn’t know how much longer he had. Check out some of the moving stories here and make sure you have a box of tissues nearby. The nonprofit also put together Character Education courses, free of charge, for educators looking to basically teach their students how to be decent human beings.

We were all given a stack of promise cards to take home and I finally filled out the first one: I promise to work on my attitude and not jump to conclusions. My boss and my husband will both agree that when faced with a problem, I will quickly jump to conclusions and paint myself into a corner instead of exploring other possibilities. I’ve actually been trying to work on that for a while so I left the promise card on my nightstand so that I see it every morning.

Best. State. Ever. On his latest book, Florida man and Pulitzer Prize-winning humorist Dave Barry defends his homeland. He acknowledges that his state is often referred to as the “Joke State,” but after extensive research, he’s come to find out that the low IQ crimes that put Florida in the headlines are usually caused by people who are from other places.

In the book, Barry travels to the Everglades in search of the Skunk-Ape, visits a psychic in Cassadaga who tells him that his dog is a dog, expects to see old, white people having sex all over The Villages but is instead met with old, white people dancing, became the oldest person to ever party at LIV and enjoyed the antics of Gatorland‘s Bubba and Cooter.

He visits old Florida attractions and places I’ve never even heard of, so I need to plan a Florida road trip soon! It is side-splitting funny and I totally recommend it! If you’re still unsure about it, check out this excerpt from his book on the history of Florida. 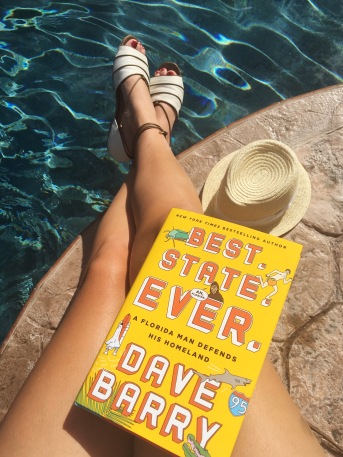 Anything fun planned for the weekend?

PS: I just found out there’s a sequel to Jumanji starring Jack Black and Kevin Hart. Clearly nothing is sacred anymore.