I imagine you all spent your weekend doing the same thing I did — tuned in to the Olympics, screaming at athletes you didn’t even know existed up until this week, urging them to bring home the gold. It was an even more historic weekend for us Puerto Ricans as Monica Puig became the first woman representing the island to bring home a gold medal from the Olympics. I’m pretty sure La Borinqueña was heard worldwide that night. #PicaPower

But back to my road trip…

My heart hurt as we packed up and left Austin, but I looked forward to continuing our travels. We documented most of it on social media, so when we posted we were headed to El Paso, my friend’s husband somehow convinced us we NEEDED to visit Marfa, Texas.

I had never heard of the place. It didn’t even sound real, but if the New York Times and NPR had featured it, then I definitely had to check it out on our way to our next destination. Plus, I’ll do anything for a good Instagram picture.

Our drive was long and uneventful for the first three hours until Halston turned to me and asked, “what day is it?”

“Oh. We weren’t supposed to leave Austin until Tuesday morning. We have nowhere to stay tonight,” he said as he calmly turned back to the road.

As it turns out, I had the old copy of our itinerary and he had the new one. In the old one, we left Austin on a Monday. Our Airbnb in El Paso wasn’t available for Monday night and the Hotel Tonight app kept showing results that were way out of our price range. I had never booked an Airbnb the day of arrival, but I (frantically) gave it a go and had confirmed lodging before we ever made it to Marfa. Success!

Driving around Marfa (pop. 1,800) felt like we were visiting an abandoned movie set. We drove past El Cosmico hoping to see any sign of life, but most of the free spirits that usually roam the campground were hiding from the sun in their tepees and campers.

We planned on visiting the Chinati Foundation, a contemporary museum that houses large-scale art installations by a limited amount of artists, only to find out that it was closed for the day. So we cruised down the empty streets and decided to stop at El Paisano Hotel, a charming little historic hotel opened in 1930. The building was added to the National Register of Historic Places and was the location headquarters for the cast and crew of the movie Giant (1955). After roaming around the shops and downing a beer at the bar, we walked down the street to the Presidio County Courthouse (it’s pink!) where the following occurred… 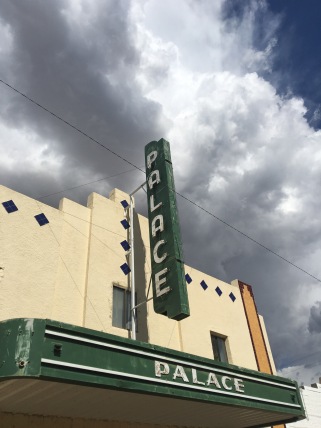 Halston and Veronica are walking around the grounds, taking pictures of the building when they are approached by a woman and her dog.

Woman: Hi there! Would you like for me to take your picture?

Halston: Sure! Thank you!

Halston hands the phone to the woman and goes back to where Veronica is standing. They pose.

She hands the phone to Halston, turns to leave and says:

“Y’all be careful out there.”

Halston: Why would she say that? We need to leave.

Veronica: I’m sure it was nothing. Then again, this seems like the beginning of a horror film…

Halston and Veronica mull over the woman’s words for a few minutes, walking to the car and decide to leave the town. As they reach for the door handles, the woman approaches them again.

Woman: If you guys are sticking around for a bit, you should go to Capri. It’s a cool bar and place to hangout.

Halston: Cool, we will check it out. Thanks!

Halston and Veronica get in the car as the woman walks away and head to Capri.

When they arrive, the parking lot in empty and there is no one inside. The building looks like it hasn’t been inhabited in years (seriously, I’m so confused. How are there reviews for this ghost bar?).

Veronica: We NEED to get out of here. She is going to kill us.

Halston and Veronica back out of the parking lot and floored it all the way to El Paso.

That was basically our experience in Marfa. I’m sorry it wasn’t as exciting as you would’ve wanted it to be, but since I’m not an artist, I guess I don’t “get it.” I would love to go back and explore some more, so if you’re reading this Visit Marfa, please host me and show me the error of my ways (here’s to hoping Visit Marfa isn’t run by that woman and her dog — the only residents of Marfa, clearly).

About 30 miles outside of Marfa, we did find the Prada Marfa which I’ve always wanted to see! This permanent art installation, located in Valentine, Texas, was set in place back in 2005. It is designed to look like a Prada store, branding and all, and it even houses Prada bags and shoes picked out by Miuccia Prada herself! The installation was vandalized shortly after it debuted and the thieves took off with six bags and 14 right-footed shoes (why). It was quickly repaired and now the purses inside hide security systems to alert law enforcement if someone tries to take the bags. 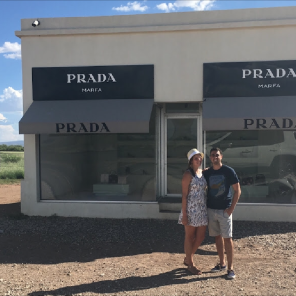 We took a few pictures (and Boomerangs, of course) and bid adieu to this strange little part of Texas.

Little did we know what awaited us in El Paso…